The Sunshine Coast is the perfect location for cockroaches. The most common species found on the Coast is the German Cockroach, Australian Cockroach and American Cockroach. These species thrive in warm, humid conditions.

Cockroaches eat a wide range of food and can spread a number of diseases to humans including salmonella and gastroenteritis. They have also been known to cause human allergies. Cockroaches will vomit and defecate on food. A Female cockroach can lay anywhere from up to 40 eggs at one time and lay around 30 batches of eggs in her life cycle.

Cockroaches are mainly found in kitchens (food preparation areas) and will feed on any food spills. They like access to water. Great hiding spots for them are: 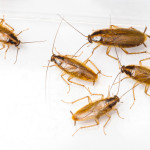 German Cockroach (Blatella germanica). In colour it varies from tan to almost black. Even though the German has wings it  can barely fly. This species is probably the most troublesome cockroach out of all the species. Attracted to meats, starches,  sugars and fatty foods. If there is no food source they have been known feed on soap, glue and even toothpaste. The German  cockroach might be small but don’t let this cockroach fool you. They are the cockroach of concern and can reproduce as  many as 20’000 babies every year. They reproduce faster than any other residential cockroach. German’s are very sociable  and mostly found in large groups typically in areas that are warm and moist. Found Australia wide. 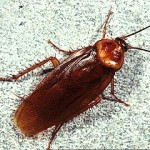 American Cockroach (Periplaneta americana). In colour is reddish brown except for the pale brown to yellow band around the edge of its head. This cockroach has wings but are moderately good flyers. The American cockroach is the largest species of the common cockroach and considered a pest. They live in moist areas but can survive in dry areas if they have access to water.These cockroaches like harboring in buildings such as restaurants, bakeries, hospitals and grocery stores. They are also found in residences. They like to squeeze into narrow cracks and crevices for safety, near food and water supply. American cockroaches will eat anything including each other. 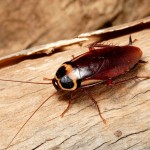 Australian Cockroach (Periplaneta australasiae). The Australian cockroach is a common species of tropical cockroach and is dark reddish brown in colour with a very distinct yellow border behind the head. Found mostly outdoors and often found under wood piles or under bark. They can also be found inside homes in wall and roof voids, cupboards, subfloor areas and in food areas. Australian cockroaches are scavengers, they feed on almost everything. Active at night and tend to enter buildings at night from gardens/debris. Despite its name it is not a native species. They are known to move very quickly, often darting out of sight when someone enters the room. The American cockroach has wings which allows it to be quite a capable flier.

– Empty rubbish in the kitchen regularly

– Clean under and behind fridges

– No sources of water eg. dripping tap. Cockroaches need a supple of water to survive

– Repair gaps or cracks in the walls, inside cupboards and skirting boards