The Sunshine Coast is the perfect location for spiders. Our subtropical climate creates the perfect opportunity for spiders to invade the internal areas of your home. After some decent rainfall , the moisture drives them to find dry areas. Most spiders prefer living outdoors, but often, you will find a  few spiders that have found their way indoors in search of food or shelter. Spiders are one of the most feared creepy crawlies we have in our home. Although most spiders are venomous, most are probably quite harmless. The most sensible action to take when seeing spiders in your home is to leave them alone. Apart from the Daddy -Long- Legs, one of the most common found in the Sunshine Coast is the Common Brown Huntsman. It is always a good idea to give your shoes are little shake before putting them on if left outside or in the garage. We highly recommend an annual pest treatment to help keep your spider problem at bay. 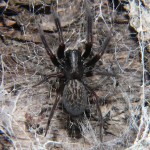 Black House Spider (Badumna longinqua) – The Black House Spider is a strong dark spider with the female being larger than  the male. They are sometimes mistaken for  a funnel web spider due to the funnel-like web shape. Black House Spiders in the  Sunshine Coast are often found in wall  crevices,  window frames, under eaves, gutters, garages and living around human  habitations. Their diet consists of household  pests that are attracted to the light of windows and electric lights. This is where  you will often find their webs. The black house  spider is venomous but they are a timid spider so very rarely bites and can cause  nausea, vomiting and in some cases skin  lesions. 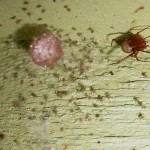 Red House Spider (Nesticodes Rufipes) –  The Red House Spider is a common spider found in the Sunshine Coast normally  found in cooler locations around the home in  corners and cupboards in their tangled webs. They breed all year round in  Queensland and can give a nasty bite which is very  painful that can last hours, even a day causing redness and swelling. The  venom toxicity is similar to the Redback Spider. The  Red House Spider will remain in its web unless disturbed when it will fall  quickly to the ground. Diet consists of ants and other  insects. Asian house geckos are good to have around as they prey on Red  House Spiders. 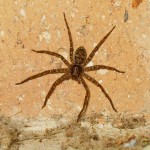 Common Brown Huntsman Spider (Heteropoda jugulans) –  The Common Brown Huntman Spider can walk in any direction,  forward, sideways, backwards and very fast. They have the    ability to return to its own territory or original location so it is often  a waste of time to remove the spider from inside to outside.  The spider will return through narrow cracks in the walls and under  floors and windows. Insect Spray of often useless as  Huntsmen are able to fun very fast from the spray to press themselves hard  up against the nearest surface to close of their lungs.  The Common Brown Huntsman are active at night waiting for their prey,  especially in summer season in backyards on walls.  Brown Huntsmen do not build webs. They hunt on the ground and in tree  trunks. One of their most favourite food is  cockroaches. The brown Huntsman can bite causing mild pain and sometimes  redness, itchiness and swelling. The most  effective action for removing Huntsmen inside your home is to engage a professional  pest manager. As Huntsmen are a large  spider it can take up to 2-3 days for the product to work after the spider has walked over the treatment. If you find the odd Huntsman walking around your home in the day there is a good chance that it is sick so rest assured that the treatment is working. 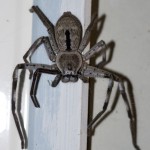 Grey Huntsman Spider (Holconia immanis) – The Grey Huntsman is a very large spider. It has been suggested that the eyesight  of the Grey Huntsman is quite poor. When running for cover they have been know to accidentally run up your legs thinking it is  a wall. These spiders prefer narrow flat spaces, behind paintings, walls and under bark. The Grey Huntsman are more active at  night being able to walk on ceilings, and vertical walls including glass. They are quite placid but very sensitive to wind and have  been know to cause a few car crashes as the spider tends to run across the windscreen while driving to get away from the wind.  Some people have claimed they have heard the Grey Huntsman scream when disturbed. More than likely the sound is caused by  liquid silk streaming out of the spider as it declines suddenly to get away from you. They are preyed upon by the Asian House  Gecko and Daddy Longlegs. There have been no recorded bites from the Grey Huntsman but if bitten can cause mild pain.

Daddy-Long-Legs (Pholcus phalangioides) – Daddy-Long-Legs are easily identified by their very fine long legs. It has been  known that the venom in Daddy-Long-Legs is very highly toxic but case studies have proved that this is not true. Their venom is  quite weak and the spider is no real threat to humans. The Daddy-Long-Legs are a common species found on the Sunshine  Coast and found in most urban areas. The the home they are normally found under furniture, in sheds and garages, corner of  ceilings, behind doors and under decks. Their home is made up of a thin tangled web and when disturbed tend to make a very  fast spinning motion. Daddy-Long-Legs feed on other spiders and insects. If an unlikely bite was to occur it can cause local  pain.

Contact your pest manager. Peregian Pest Control can conduct an inspection on what species you have and what is the best form of treatment. The treatment normally involves an internal/external perimeter treatment including roof cavities. Keep your home neat, tidy and free of dust or webs is the best way to keep spiders from moving in. Regular vacuuming, dusting, and de-cluttering will keep any insects from making themselves at home. Keep outside your home tidy as well. Spiders love leaves, wood piles and grass clippings. Preventing spiders on the outside will help prevent them from coming inside.